Early forms of night vision became available about 50 years ago. Since that time, the technology has experienced explosive advancement.

Above: Over-bow visibility on Lake Ozarks
Below: Same scene as seen through Nite Track

Early applications of night vision were extremely expensive and almost strictly military. But in recent years, a variety of night vision options have become smaller and more affordable. With the accessibility of night vision, activities that are normally awkward or difficult to do at night — things like boating and or off-roading — become a real after-dark recreational possibility.

Now you’re here at the Nite Track site, so you can see the clarity that our night vision product delivers. And if you’ve looked at the price, you’ve may have noticed how much cheaper it is than other options on the market.

What’s the catch? How can something that provides a picture that is so much better also cost so much less?

The answer to that question lies in the technology we use.

When it comes to night vision, most of the options you’ll find on the market fall into one of two categories.

Thermal imaging technology is capable of “seeing” light waves that are much longer than the human eye can see. These light waves are emitted by thermal radiation… a fancy term for body heat.

Thermal imagers use something called a microbolometer, which reads differences in thermal radiation to produce a useful image. If you’re trying to locate people or see warm objects in the dark, a thermal imager is hard to beat.

On the downside, the images produced by any kind of affordable thermal imaging system are typically of a low resolution. (To get high resolution thermal images, you’ll need to spend upwards of $15,000.)

Thermal images lack detail. They’re showing you only the differences in temperature between objects. If you’re boating or off-roading at night, a thermal image won’t necessarily show you objects in your path. If those objects have the same ambient temperature as their surroundings, you won't see them. You still might find them with your boat or ATV, though… a situation you want to avoid.

The second common type of night vision technology is Image Intensification (I2).

I2 technology does just what it sounds like. It intensifies the existing light. Image intensification is almost always used with goggles or with a handheld monocle, making it a good option for tactical applications.

It provides better image detail than thermal imaging. But like thermal imaging, it has a number of shortcomings. I2 gives you a very narrow field of view, which means your situational awareness when using this type of night vision is limited. It also doesn’t integrate well with video systems, so using I2 hands-free in a boating or off-roading scenario is either impractical or very expensive.

Nite Track uses a different technology than either thermal imaging or image intensification. 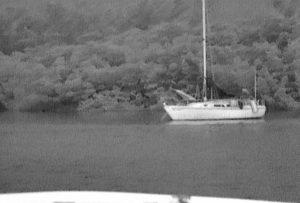 We use a Charge Coupled Device (CCD), a semiconductor-based technology invented by Bell Labs in 1969. This technology takes photons and converts them into electrical charges that can be translated to a video screen as a real-time streaming image. The result is a clear image with a realistic depth of field that boaters, hunters, and anyone else interested in being able to see clearly at night — even if they are moving fast — can use to safely navigate their surroundings.

The special lenses required for both thermal imaging and I2 technology are expensive, making systems that rely on these technologies expensive. CCD technology does not have that same limitation.

Here’s how it breaks down…

As you can see from the chart, with our Nite Track tech, you can see in absolute darkness… you can operate it hands free… you can read text and see other details in your surroundings… you can see through glass… and you can see everything at high resolution processed at a video rate that is comfortable and natural to the human eye.

And you can do it all for far less than competing technologies.

Start using Nite Track for a safer more enjoyable after-dark recreational experience. We offer a fixed-mount system for your boat and a portable system you can use on ATVs, watercraft of all sizes, or other vehicles.